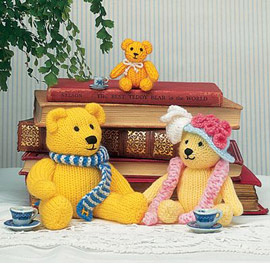 On the left is a trio of teddy bears as featured in our booklet Jemima-Jane and Friends.  The ‘m1’ abbreviation is used throughout the teddy patterns.

The ‘m1’ (make one) abbreviation represents a standard knitting technique, which makes a new stitch.

In the Notes pages of our booklets, all the basic information is provided to assist knitters in following the pattern instructions.  In the Abbreviations section ‘inc’ is explained as follows:
‘inc = increase, by working twice into the same st’.

When I use ‘m1’ in a pattern, this method has a full explanation in the Notes under the heading ‘Special abbreviations’.  I describe ‘m1’ in more detail than is usual, so that knitters who aren’t familiar with this technique, will be able to do it without any problems.

Now, I suspect that many people are so keen to get on with the real business of knitting, that they manage to by-pass the Notes pages altogether.  Normally, this isn’t a problem because knitters are usually familiar with knitting instructions and abbreviations, until ‘m1’ pops up and sometimes causes confusion.

Even experienced knitters have written to say there is a mistake in a pattern – and it’s inevitably because they are trying to ‘inc’, when the instructions specify ‘m1’.  Unfortunately, the two methods are not interchangeable.

Knitters are aware that the ‘inc’ method uses an existing stitch to make another stitch.

But the ‘m1’ method doesn’t require an existing stitch to make a new one.  It is worked inbetween two stitches, creating the new stitch from the strand of yarn which lies between the two stitches.

If a knitter tries to use the ‘inc’ method instead of ‘m1’, it doesn’t work.  There aren’t enough stitches on the knitting needle to ‘inc’ and the end-of-row stitch count is not the same as specified in the pattern.

Being aware of this ‘avoiding the Notes’ problem, in subsequent booklets I have included extra Notes at the precise places where ‘m1’ is used in the pattern –
‘For the ‘m1’ abbreviations which occur in the instructions
which follow, refer to Special abbreviations on page 2’.

Do these extra Notes work?  Well, we still get the occasional ‘mistake’ letter, asking for the pattern correction. I take this to be a compliment to my designs.  Avoiding ‘Notes’ just means that knitters can’t wait to cast on and – go!

I’ve just had a thought – I’ll put the ‘m1’ information in this article. There’s a lot more detail in my ‘m1’ than you will find in other knitting publications and here it is.